Sharing the same interest, APISEED joined The European Living Beekeeping Association (ELBA) and shared its vision regarding the importance of beekeeping, bees health and agroforestry for our economic and environmental development and sustainability.

As social economy based on the principle of solidarity targets citizen groups facing socio-economic difficulties APISEED emphasizes the importance of supporting women in general. Yet, we find extremely important to provide help and support for single mothers. Therefore we joined and created a partnership with the Macedonian organization for single parents ONE CAN.

We provide additional information about our partners:

The European Living Beekeeping Association (ELBA) dedicates to defend an apiculture respectful of the bee, its products, the beekeeper and the consumer. Since its creation in 1996, ELBA promotes the virtues of hive products for human health – for food or medicinal purpose – as tradition has always taught us. History has long validated the health benefits of these products, but current research is increasingly confirming their potential.
The therapeutic efficacy of hive products is strongly linked to an ecological practice of apiculture. So in addition to the main principles of organic agriculture, ecological apiculture must also apply techniques conform to the biological needs of the local bee subspecies. The specificity of ELBA is to propose a “living” apiculture protocol based on the teaching of techniques respecting the insect, the colony, its biotope, and its ecosystem as closely as possible.
The respect of this protocol ensures optimal quality of beehive products – both organoleptically (conservation of essential oils) as well as the chemical composition – allowing to preserve the essence that bees infuse into their production.
ELBA President, Pr. Roch Domerego :
Professor Domerego, beekeeper, naturopath, vice president of the Apimondia Apitherapy Commission from 1997 to 2011, has been studying the effects of bee products on human health since 1981. Permanent professor of the Faculty of Medicine Calixto Garcia of Havana (Cuba), he taught for 7 years to the students of the Faculty and supervised several clinical studies in the University Hospitals of Cuba.
Pr. Domerego has been involved for 20 years in international development program for education, health and wellness programs through beekeeping and its solutions. Those programs, mandated by the UNDP, aimed to show the contribution of scientific use of natural products from the hive to the socio-economic development of the countries.
The greatest achievement was in Cuba, where a development program was conducted for more than 8 years (nearly 600 doctors and hospital staff trained), in close collaboration with political and academic authorities. The ministries of health and agriculture had declared it a national priority.
The Cuban experience, which Pr. Domerego has co-directed, proved the effectiveness in human health of hive products when methods of production and use are accompanied by strict protocols. Economic interest was also demonstrated with products made entirely in the country and cheaper than those imported.
ELBA partnership with the UNESCO Haute Provence Geopark :
This partnership makes ELBA a « UNESCO Geopark label association » benefiting from the support of the Haute-Provence Geopark, first Geopark created in 2000 by UNESCO and serving as a model for the development of many Geoparks worldwide.
ELBA and the « UNESCO Geoparc de Haute-Provence » have committed to carrying out joint actions for :
– The protection of local bee subspecies and their own ecosystem.
– The achievement of the Sustainable Development Goals.
– The enhancement of cultural and traditional ties uniting peoples and bees.

The first achievement of this partnership was the Pie Fourcha project (commune Le Vernet) where an apiary was set up in an almost millennium old site, located at the heart of the hamlet.

This apiary, composed both of traditional hives in the trunk and of modern horizontal hives, reflects the evolution of the relationship between men and bees through the ages. The hives are exclusively populated by bees of the local subspecies, adapted to their environment and representing a harmonious and therefore successful evolution with their biotope. The natural reproduction mode of bees by swarming is respected. Colonies serve to produce native swarms that seed nature to find wild bees in its heart. These are sent as true messengers of our conscience as a bridge to the living.
Visit ELBA website to learn more about our actions : www.aeav.eu

“One can” begin in 2014 as women’s movement for stereotypes transformation regarding one parent families and single parents in Macedonia. The movement counted around 2000 members. After two years of activism, a civic organization was formed primarily fighting discrimination and improving single mothers rights and opportunities.

Three years after acting as a legal representative it continued as an organization for gender equality and women’s rights and freedom.

One can! strategically acts in three sectors: 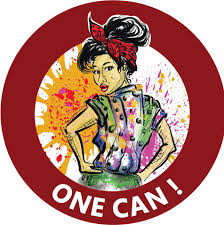 Strengthening young ladies and women in general through suitable training in gender sciences and women’s rights.

Grassroots origin of the organization forever established the concept of voluntarism.

So far, One Can! was part of many initiatives with similar organizations from the civic sector in the area of monitoring and creating public policies, instruments, and measures for socially endangered groups

As social enterprise One Does! was created to create new jobs for single mothers by organic cosmetics production and selling.

We believe that solidarity is a political question!

The Macedonian Beekeeping Federation is founded in 2015 by several beekeeping associations. Nowadays it represents the interests of over 800 beekeepers. MBA aims to improve the beekeeping sector work, level up the standardization of production, help beekeepers in overcoming the problems and challenges they face, as well as to protect the environment, biodiversity and bees.